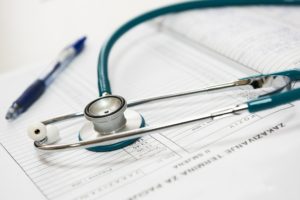 Christian Doppler’s work laid the foundations for many important pieces of medical diagnostic equipment. The Japanese scientists, Satomura and Kaneko launched their “Doppler-Rheograph” in 1959, and became the first to apply the Doppler principle to medical diagnostics.

The Doppler effect in screening and early diagnosis

As early as in the womb, the Doppler principle makes it possible to see or hear the heartbeat of an unborn child, the speed at which the blood travels through the umbilical cord, and the aorta and cerebral arteries. This allows heart problems, poor circulation and oxygen deficiency to be detected before birth.

A simple Doppler-based vascular ultrasonography procedure used to investigate blood vessels, mostly in the legs, uses the ultrasound echo from red blood cells to make audible the blood flowing through veins and arteries. This allows vessel narrowing and vortex build-up to be heard and diagnosed. In the case of narrowing, the blood is forced to flow faster. Varicose veins, thrombosis and smoker’s leg can thus be detected early.

Modern Doppler sonographs with colour screens show the movement of blood with different colours representing different speeds. This enables an impressive colour-coded representation of heart, liver and kidney function and all larger blood vessels, meaning that even after operations or transplants, the functioning of organs can be monitored effectively.

Stroke, which after heart disease and cancer is the third most common cause of death in the developed world, usually results from the arteries that convey blood to the brain becoming narrowed or blocked. A more modern development even allows the main cerebral arteries to be seen, and the speed of blood flow within them to be measured.

Thus many medical investigations would not even be possible without the discovery of the Doppler effect. Its great advantage is that instead of investigative surgical procedures, diagnosis can be carried out by interpreting the echoes from soundwaves applied from outside of the body.

Almost every hospital worldwide has a Doppler laboratory.