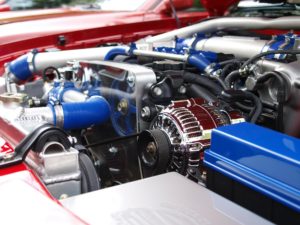 Gasses travelling through pipes also contain small particles of other materials. An ultrasound wave is sent through the wall of a pipe. The echoes reflected back from the moving particles have a different frequency, which allows the speed of the particles to be calculated.

This procedure allows flow to be investigated in very narrow pipes, or at the super-sonic range.  For example, it can be used to measure flows in combustion engines, and thus to improve their efficiency.

Satnavs and GPS: possible thanks to the Doppler-Effect

The Navigational Satellite Timing and Ranging – Global Positioning System, or GPS, is a navigational technology developed in the 1970s which calculates the position and altitude of a receiver using data from multiple satellites. Because the satellites are moving around the Earth, satnavs and GPS function according to the Doppler effect. This means that electrical waves emitted by these navigational devices shift in length, allowing the distance to the satellites to be deduced. This is how satnavs and GPS devices calculate the position of the receiver.

This means that as long as satnavs, GPS devices or mobile phones are turned on, the position of the device can be determined. This can sometimes be of great assistance to the police, or for missing persons investigations.

Radar and sonar with the Doppler effect

Radar (RAdio Detecting And Ranging) was invented by Heinrich Hertz in 1886, when he discovered that metals reflect electromagnetic waves, but it was not until the 1930s that radar had become developed enough to detect attacking aircraft, tanks or ships on the high seas at a distance of up to 40km. The much maligned road traffic radar (speed trap) had its premiere in 1956.

Using the Doppler effect, the radar sends out electromagnetic waves that are reflected by the object being detected. The road traffic radar immediately determines if the waves are stretched or compressed, and if the object is thus moving closer or further away, and it calculates what speed the object is moving at. The road traffic radar does not just catch speeders, but can also be used to manage traffic flows at bottlenecks, road construction sites and junctions. It passes the data collected on to a central computer, which in turn determines the most efficient traffic speed for the situation, and displays this on electronic signs, or adjusts the phases of traffic lights accordingly.

Sonar, another application of the Doppler effect, sends out soundwaves, which in water can reach about 1480 m/s, four times the speed of sound in air. If these waves encounter an object, they are reflected back. Sonar uses these reflections to determine distances and the movement of objects.

Dolphins have their own similar natural echo-location device, which makes hunting significantly easier. In the same way as bats, dolphins emit sounds which are then reflected by the bodies of their prey, and alert the hunter to their location.

Using the Doppler effect to forecast the weather

Without weather radars, and thus once again without the Doppler effect, it would be impossible to forecast the weather. Clouds contain water droplets or hailstones which reflect electromagnetic waves. Because these clouds move, the weather radar is able to determine their position as well as their speed and direction of movement. By analysing this data, weather forecasts can be made about where and when we can expect rain or hail, and how much – so long as the wind does not suddenly change direction.

The Doppler effect is also behind how ground radar works. As the emitter moves, the wave length of the radar pulse and the echo of the targeted object reveal the latter’s position and distance. In this way, radar can be used to find, for example, a plane buried 75m deep in the ice of Greenland that crashed 70 years earlier, a dinosaur in Patagonia, or a mammoth in Siberia.

Using the Doppler effect to measure the Earth.

One of the goals of geodesy (practical geometry) is to investigate the many different contours of the surface of the Earth, in order to display these with different colours for flat terrain or mountainous areas on geographical maps. Equally detailed and precise measurements of the Earth’s surface have been carried out by “Doppler satellites” since the 1960s, by TRANSIT since 1996, and the DORIS system since 1990. The satellites circle the longitudes of the Earth (over the poles) and scan the Earth in a similar way to radar. Because these satellites are moving very fast relative to the “stationary” Earth, the Doppler principle also comes into play here.

Doppler Orbitography and Radiopositioning Integrated by Satellite (DORIS) misses nothing because the combined orbits of the individual satellites form a kind of 3D grid around the Earth, which frames the Earth as it turns on its axis.